Polina Semyonovna Zhemchuzhina (born Perl Semyonovna Karpovskaya; 1897 – 1970). Soviet politician and the wife of the Soviet foreign minister Vyacheslav Molotov. Zhemchuzhina was the director of the Soviet national cosmetics trust from 1932 to 1936, Minister of Fisheries in 1939, and head of textiles production in the Ministry of Light Industry from 1939 to 1948.
In 1949, Zhemchuzhina was arrested by the Soviet secret police, charged with treason, and sent into internal exile. After the death of Stalin in March 1953, she was released from captivity by Lavrentiy Beria and reunited with her husband. Her first question upon her release was "How's Stalin?" Upon being told he had died only days before, she fainted.
Happily and lovingly reunited, Polina Zhemchuzhina and her husband lived in the Granovsky apartment block near the Kremlin. She died of natural causes in 1970.


- "She wore her red hair with a golden shine in a high knot."  https://books.google.it/books… 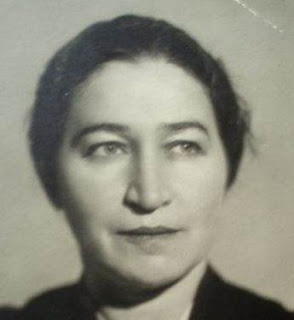