René Valet (1890 - 1912). French anarchist.
In 1911 Valet joined a gang led by Jules Bonnot. Amongst comrades they were known as 'illegalists', which signified more than the simple fact that they carried out illegal acts. Illegal activity has always been part of the anarchist tradition, especially in France.
On 24th April, 1912, three policemen surprised Jules Bonnot in the apartment of a man known to buy stolen goods. It is claimed the building was surrounded by 500 armed police officers, soldiers and firemen. Bonnot was able to wound three officers before the house before the police used dynamite to demolish the front of the building. In the battle that followed Bonnot was shot ten times. He was moved to the Hotel-Dieu de Paris before dying the following morning.
Valet remained on the run with Octave Garnier until 15th May, 1912. According to Victor Serge: "Octave Garnier and René Valet, caught up at Nogent-sur-Marne in a villa where they were hiding out with their women, underwent an even longer siege, taking on the civil police, the gendarmerie, and the Zouaves. They fired hundreds of bullets, viewing their attackers as murderers (and themselves as victims) and, when the house was dynamited, blew out their own brains."
Another red-haired member of the Bonnot gang was Édouard Carouy.

- "I remember his fine, square-set ginger head, his powerful chin, his green eyes, his strong hands, his athlete's bearing..."  https://spartacus-educational.com/ANA-Rene_Valet.htm

- "... others joined the first few such as red-haired Rene Valet..." https://spartacus-educational.com/ANA-Stephen_Monier.htm

- "The next day, the redhead, whose name was Valet..."  https://maisondetraductionblog.wordpress.com/…/updated-11-…/ 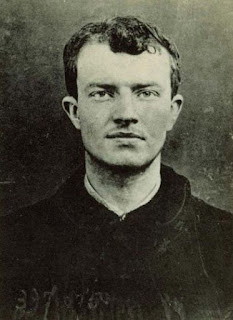