Charles Allston Collins (1828 – 1873). British painter, writer and illustrator associated with the Pre-Raphaelite Brotherhood.
His father was the landscape and genre painter William Collins and his older brother was the novelist Wilkie Collins.
Collins met John Everett Millais and became influenced by the ideas of the Pre-Raphaelites. Millais proposed that he should become a member of the Brotherhood, but Thomas Woolner and William Michael Rossetti objected, so he never became an official member.
In the late 1850s he abandoned art to follow his brother into a writing career. His most successful literary works were humorous essays collected together under the title The Eye Witness (1860).
Collins married Charles Dickens's daughter Kate in 1860, and later was engaged to illustrate Dickens' unfinished novel The Mystery of Edwin Drood. He completed the cover but was too ill to do the rest. He died from cancer in 1873.


- "The characteristic that marked him out to casual observers was his brilliant bushy red hair, which was not of golden splendour, but yet had an attractive beauty in it. . ."  http://www.victorianweb.org/painting/whh/drawings/40.html

- "Tall and good-looking with red hair and blue eyes, Charles was unlike his brother in character as well as appearance, although they remained close throughout their lives."  https://www.wilkie-collins.info/family_charles.htm 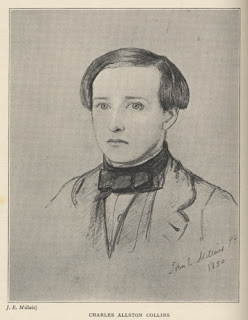