Yitzhak Rabin (1922 – 1995). Israeli politician, statesman and general. He was the fifth Prime Minister of Israel, serving two terms in office, 1974–77 and 1992 until his assassination in 1995.
In 1994, Rabin won the Nobel Peace Prize together with long-time political rival Shimon Peres and Palestinian leader Yasser Arafat. Rabin also signed a peace treaty with Jordan in 1994. In November 1995, he was assassinated by an extremist named Yigal Amir, who opposed the terms of the Oslo Accords. Amir was arrested and convicted of Rabin's murder; he was sentenced to life imprisonment. Rabin was the first native-born prime minister of Israel, the only prime minister to be assassinated and the second to die in office after Levi Eshkol. Rabin has become a symbol of the Israeli–Palestinian peace process.

- "Rabin was a strong, handsome forty-five-year-old, secular, red-headed in charge of the army."  https://books.google.it/books…

- “Rabin was a “red head” when talking, more so than in action”   http://citeseerx.ist.psu.edu/viewdoc/download… 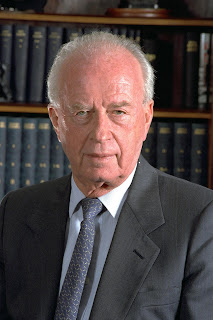