Larissa Mikhailovna Reissner (sometimes spelt Reisner, 1895 – 1926). Russian writer and revolutionary. She is best known for her leadership roles on the side of the Bolsheviks in the Russian Civil War that followed the October Revolution and for her friendships with several of the Russian poets of the early 20th century.
She is said to have inspired the character of Lara in Boris Pasternak's Doctor Zhivago.

- "A slender young woman with auburn curls and the beauty of a Minerva without her helmet..."  https://books.google.it/books… 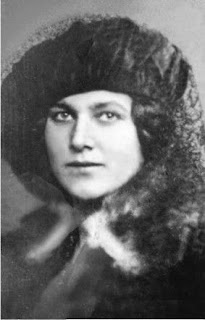