Katherine Jane ("Kate") Chase Sprague (1840 – 1899). Washington society hostess during the American Civil War. During the war, she married Rhode Island Governor William Sprague.
She was the daughter of Ohio politician Salmon P. Chase, who served as Treasury Secretary during President Abraham Lincoln's first administration and later Chief Justice of the United States. She was a strong supporter of her widowed father's presidential ambitions which, had he been successful, would have made her First Lady.
The marriage with William Sprague ended in divorce in 1882. Before the divorce, Kate was accused of having an affair with the flamboyant and powerful New York Senator Roscoe Conkling. According to a well-known story, Sprague confronted the philandering couple at Sprague's Rhode Island summer home and pursued Conkling with a shotgun and threatened to throw Kate out of a second story window.

- "The young, dazzlingly red-haired Kate Chase considered herself her father’s head booster in his quest for the presidency.”  http://www.mrlincolnswhitehouse.org/…/notable-visitors-kat…/

- "Hazel eyes, auburn hair, and the marvellous whiteness of skin that usually accompanies this combination..."  https://www.pillartopost.org/…/retro-files-famous-american-…

- "The fine forehead was framed in waving, gold-brown hair."  https://www.costumecocktail.com/…/08/kate-chase-sprague-18…/ 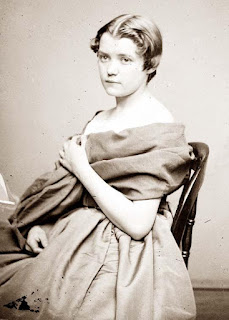