Aron Vergelis (1918 - 1999). Soviet poet and journalist of Jewish descent who wrote in Yiddish.
He took part in World War II, worked as an editor of Yiddish-language radio broadcasts and after the war as secretary of the Jewish department of the Soviet Writers' Union.
He was one of the few Jewish writers who managed to avoid the purges of 1948–1953. In 1955, he became a member of the CPSU. From 1961 on, he served as editor-in-chief of the Yiddish language journal Sovetish Heymland (Soviet Homeland), while participating in Soviet anti-Zionist campaigns. 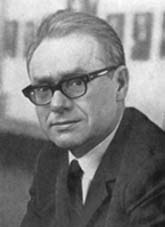